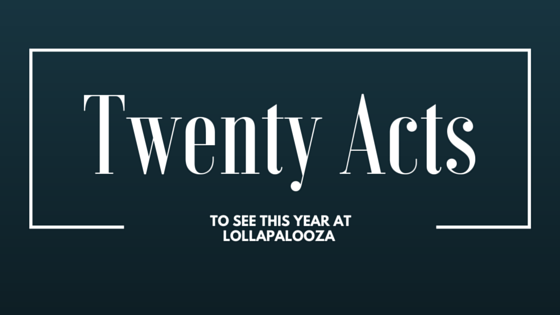 We’re all adults here, so we can admit that everyone is going to have their own opinion in regards to whether or not this year’s Lollapalooza lineup is good or not. That’s fair. Music is subjective and someone that I may despise may be a great fit for someone else. That’s why it’s so exciting! With that being said, I think that it’s easy to agree that the lineup is quite diverse in regards to genre.

Call me whatever you’d like, but I have personally don’t have much interest in the headliners performing this year at Lolla. But the beauty of music festivals is that I now have about four months to listen to them in hopes that something will catch my ear and get me excited to see some of them perform.

You may be wondering why exactly I’m going this year in response to my previous statement. The answer for that is: undercards!!!!!!!

There’s about 10-12 headliners spread out through the four days this year, give or take, which means there’s over 150 other acts you can get a chance to see. I’ve gathered a list of 20 of these artists (5 each day) that I’m most excited to see this year and will hopefully get a chance to see all of them without schedule conflicts.

Side note: Happy blog-versary to me! Today is my blog’s first birthday and on this day in 2015, I published my first post “Ten Acts I’m Dying to See at Lollapalooza.” Check it out here.

After seeing this band’s name at the bottom of the Lolla lineup and hearing a couple songs,  I immediately knew I wanted to see them at Grant Park this summer. I really like their authentic sound that they have produced through recording their album (available on Spotify), and I think they will have a very diverse audience this summer. I can’t wait to hear more from them.

Genre: Emo Indie Rock
For Fans Of: From Indian Lakes, Kings of Leon

Many of the musicians playing Lollapalooza that I want to see all seem to have one thing in common: they are so young! This 19 year old from Melbourne, Australia (real name is Kaity) seems to have the vocal gift sent straight from the heavens above. The success that she has found in Australia will surely translate to America and the rest of the world.

Genre: “Scandinavian Soothing Metal” (Taken directly off of her Facebook page).
For Fans Of: Birdy

Think of She & Him, but indie pop with an occasional ukulele, and five additional members. How can you resist?! This band hails from Austin, Texas and have been making music since 2011. To say I’m obsessed with their sound is an understatement, and I can just see myself lying in the grass of Grant Park, soaking up the sun and hopefully an accompanying breeze.

Genre: Indie Pop
For Fans Of: Vance Joy, She & Him

I find this booking to be so exciting because I actually watched Melanie when she was a contestant on the third season of The Voice in 2012. She’s only 20 years old and has had a lot of success in 2015 after the release of her debut album, Cry Baby. Since she’s playing the same day as Lana Del Rey, I would guess that there will be a lot of overlap in regards to the kinds of people you may see in the crowd for those two women. I’m not sure how much I love her music, but I would definitely like to see how she performs in front of a crowd.

Alright folks, I’ll be the first to admit that I had no idea that Alex Turner had a side project. But when I realized it, I was instantly hooked. The Last Shadow Puppets is comprised of Alex Turner of the Arctic Monkeys and Miles Kane, James Ford, and Zach Dawes. What’s even more surprising is that they have been making music since 2007. They definitely have a similar vibe to the Arctic Monkeys but a bit more of a 60s vibe. They will most likely be headlining a smaller stage on Thursday and I would love to catch some of their set. Hopefully it will make up for me missing the Arctic Monkeys for Eminem in 2014.

Genre: Baroque Pop
For Fans Of: Well, the Arctic Monkeys

We all know how much I’ve raved about Alessia before, and I got to see her in January at the Metro here in Chicago. She just performed at the first weekend of Coachella and I’m really excited to see her perform in a festival setting. She’s so young (turns 20 about two weeks before Lolla weekend), and I know she will have a pretty large turnout and it’ll be interesting to see what time slot she gets.

Gaining massive success in the UK (where they’re from), Foals is slowly making their mark  on the U.S. music scene. They’ve definitely grown a cult following here and I’m really excited to see them after watching a bit of their Coachella live stream. They’re basically touring the entire summer in America and Europe, so they’ll be plenty busy promoting their newest album, What Went Down.

Genre: Indie Rock
For Fans Of: The Killers

Wolf Alice is arguably the act that I am most excited to see at Lollapalooza this summer. Fresh off of a Grammy nomination for “Best Rock Performance” for Moaning Lisa Smile, a track of of their debut album, My Love is Cool, the band has been touring around the world and has some summer festival slots set for the summer. Their Coachella set was highly praised (they’ve been called one of the best live bands in 2016), and I cannot wait to see what they bring to Chicago.

Genre: Indie Rock
For Fans Of: Catfish & The Bottlemen

I hate to admit this, but I definitely judged this band based on their appearance on their album cover. I totally got the Versaemerge / Evanescence / Hey Monday vibe and was not interested in listening to another pop punk bad with a female singer: it’s just not my taste (nothing wrong with those bands). But I gave them a chance after my friend who is going to Lollapalooza with me told them how much he liked them, so I decided to stop being obnoxious about it and gave them a listen. They remind me a lot of Paramore’s early days with upbeat pop/rock music and I think they would put on an excellent show.

Genre: Pop Punk
For Fans Of: Paramore circa 2007

Modern Baseball brings me back to the days when I was in middle school and thought wearing purple pants made me punk. But really, these guys have a special story telling ability that’s very expressive in their sound. I definitely equate their style to The Front Bottoms (playing Saturday), and I know for a fact that they will put on a fantastic performance. Something to pay attention to: their crowd. It’ll be an interesting one!

Genre: Emo Alternative Rock/Punk
For Fans Of: The Front Bottoms

Mutemath has been around since 2003 and it’s embarrassing for me to admit that I have never listened to them. They’ll be going on tour with Twenty-One Pilots this spring, stopping in Chicago at Allstate Arena. I can definitely picture them putting on a great, upbeat performance and I hope that I get a chance to see them.

Genre: Indie Pop
For Fans Of: Walk the Moon

Like Wolf Alice, Leon is one of the artists I am most excited to see perform live this summer, particularly because he’s making music that nobody else is making right now. He also is known to put on an incredible live performance. I’ve never seen a soul performer live in concert and it will for sure be a refreshing experience for me. I wrote about him a few months ago and I can’t wait to see him perform live.

Nothing But Thieves was one of the first bands confirmed to play Lollapalooza, and dumb enough, I didn’t pay attention to their music until the were confirmed to be on the lineup. With that being said, I’m actually obsessed with them and know they’ll play a great set with a stadium sound. The lead singer’s voice very much reminds me of the lead singer of Muse and I’m hoping they can bring as much powerful to their set as Muse is known to bring.

Genre: Rock
For Fans Of: Muse

First of all, this girl is absolutely fantastic and like many of the other women performing at Lollapalooza, is SO YOUNG! Dua Lipa is only 20 years old and her debut album will be dropping sometime in May. She only has three songs released on Spotify right now, but I love them all! She has a great, fresh sound that will definitely get the crowd dancing.

I have a love-hate relationship with Grimes. Her music is honestly just so weird to me and I watched about 30 seconds of her Coachella performance and I personally thought she sounded very bad live. But I’m interested in her music and the way that she makes it so I will definitely try my best to see at least 10 minutes of her set. Interesting is good!

Genre: Electronic Pop
For Fans Of: Honestly, I don’t even know. She’s so different than everyone out right now. Please give me suggestions.

Again with the young female singers, but this girl is absolutely killing the game right now. Lapsley is from England and is only 19, but that isn’t stopping her from making huge waves in the U.S. She’s currently on tour in the states and I am actually seeing her on May 1st in Chicago! I can’t wait to hear her soulful voice live.

Genre: Alternative R&B
For Fans Of: A mellow Lorde

Michael Joseph Nelson is from the United Kingdom and has had success with his E.P. Banners that was released in January of 2016. He has a very mellow, chill sound and is definitely a romantic. He has a very relaxed sound that will be interesting to see in a setting like Lollapalooza that has a variety of upbeat, loud performances. I think he will be one to watch this year.

I am a broken record, but it’s only because I am so unbelievably impressed with the lineup of young women who I will get to see perform this year! Aurora is only 19 years old as well and has major success transitioning from Europe to the United States. Her cover of the David Bowie song “Life On Mars” was featured in an episode of HBO’s Girls. She’s definitely in my top five of who I’m most excited to see.

Genre: Synthpop
For Fans Of: Sounds exactly like the lead singer of Misterwives, but has a storytelling ability like Noah & The Whale (may be just to be, but I hear it!).

UGHHH. I discovered this trio just a few weeks before the Lolla lineup dropped, and I was hoping with every inch of my being that they would be on it! Muna will be touring with the likes of Miike Snow, St. Lucia, and BØRNs this summer. I actually purchased tickets to BØRNs Chicago show and I’m super pumped to see Muna with him. These ladies are also all producers: how amazing is that?!

Years & Years have been on my radar for the last six months or so, and I was hoping that they would also be at Lollapalooza this year. Started in the UK (like most of the world’s musicians), and have been finding success in the US. They will be opening for Ellie Goulding’s tour in just a few weeks.

Who are you dying to see at Lollapalooza this year? Any other festivals? Let me know in a comment below. Be sure to check out my Lollapalooza Spotify playlist here.