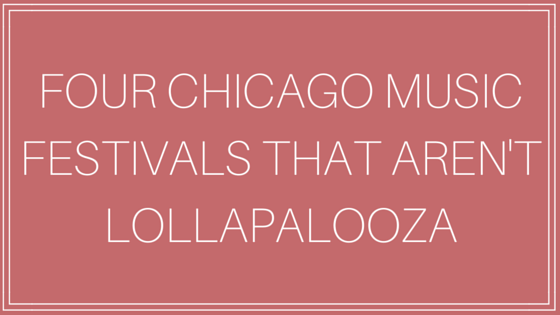 While Chicago is pretty well known for its music festivals, Lollapalooza still continues to dominate the summer festival season. It’s California’s Coachella and New York’s Governor’s Ball, but it’s still important to branch out and learn more about all of the other exciting music events that the city has to offer.

Below are four Chicago music festivals that I believe are worth checking out, not to mention that they are all pretty affordable compared to Lolla.

Mamby On the Beach – This festival had its inaugural year in 2015 and seemed to have diversified their lineup a bit from last year’s. With almost an entire lineup dedicated to EDM in 2015, the lineup has moved to more alternative and hip-hop acts. It may seem a little pricey, but it’s not a bad alternative to bigger festivals like Lolla or Riot Fest.

Taste of Chicago – Not only has the Taste of Chicago been around for thirty-six years, but it is also the world’s largest food festival. Pretty cool, right? This is a great festival in Chicago for budget conscious individuals who are looking for some affordable fun. I saw Fun. at the Taste in 2013 and had an awesome time.

Pitchfork Music Festival – All of the hip kids who are too hip for Lollapalooza go to Pitchfork. With that being said, I have yet to attend this festival but was very much ready to go this year. Unfortunately, I will be out of town this weekend visiting family. I’ve heard that this festival is a lot more controlled and not nearly as overwhelming as Lollapalooza, but they tend to cater to the similar demographic and have the same sort of music. It’s also about half as much money for the entire weekend.

North Coast – This music definitely isn’t my style, but this line-up has been getting praised for booking very popular EDM headliners. It would definitely be an interesting vibe and I’m sure that it would be nothing like Pitchfork (despite being held in the same park). It’s also held at the end of the summer, so I’m sure its attendees will be going out with a bang. Similarly with the festivals above, it’s pretty affordable.

Are you going to any festivals this summer?

0 comments on “Chicago Music Festivals Worth Checking Out”