This past weekend, I had the opportunity to go to Mamby On the Beach, a music festival in Chicago that is just three years old. I had not gone in previous years, although artists appearing on the lineups like LANY, Bishop Briggs, Chet Faker, Phantogram, Betty Who and Gallant (to name a few) caught my interest in years past. I decided to go this year on a whim because once my best friend and I realized that Local Natives was on the lineup, we knew we had to go.

The festival, produced by React Presents, takes place at Oakwood Beach, a small beach located just east of Chicago’s Bronzeville neighborhood. The festival spanned two days, Saturday and Sunday, but I opted to go just on Saturday because I preferred that day’s lineup.

We were lucky to get a beautiful day, the temperature hovering around 75 degrees all day with some cloud coverage and a nice breeze, since we were on the lake all day. The festival had a variety of attractions aside from the three stages, including free yoga, tarot card readings, food trucks, merchandise tents, and even a silent disco!

After a bit of trouble finding the shuttle bus that was supposed to get us from the Chinatown Red Line Stop to the beach, we ordered a Lyft to get there instead. This was a minor setback to the day and really the only complaint I had about the festival: we waited about 20 minutes for the bus to show up to pick us up, along with about 50 other festival goers, and growing impatient, we decided to just get picked up to get there a bit quicker. Entering the festival was easy and fast, and there wasn’t congestion at the gate, like how Lollapalooza gets at busy entering times.

We arrived inside the festival around 1:30PM and decided to walk around since neither of us had been to the festival before. The setup was easy to maneuver and walking distance between the stages was less than five minutes, which was nice.

We headed to the Park Stage to check out SHAED (pronounced like “Shade”), which is an indie pop band from Washington D.C. I knew a handful of songs from the band and was excited to check out their live performance. The members, Chelsea, Spencer and Max, have been playing some festivals this summer like Firefly, Summerfest and Electric Forest, and recently toured with Bishop Briggs. SHAED will also be supporting Sir Sly on a handful of dates this summer.

Next up, we decided to check out the food options. There was at least 20 different vendors selling food and the festival had a variety of vegetarian, vegan, and gluten free options as well, which was neat! We decided to get bacon mac ‘n cheese grilled cheese sandwiches from Doom Street Eats – which were delicious!

We took a seat in the grass at the park stage and caught about 20 minutes of Saba’s set. Saba is a Chicago rapper who has music with the likes of Chance the Rapper, Smino and Noname. Although I’m not the world’s biggest rap fan, I appreciated Saba’s energy and ability to hold the crowd interested in his performance. He also seemed to have a lot of family and friends supporting him at the festival and it was fun to see. After lunch and a trip to the silent disco (when you dance to a live DJ spinning music that plays through your headphones – it’s amazing), I caught a few minutes of Phoebe Ryan’s performance at the Park Stage. We only watched about 15 minutes of it because we weren’t too into her live voice (to put it respectfully) and decided to wander around for a bit and caught these views of the skyline across the festival! 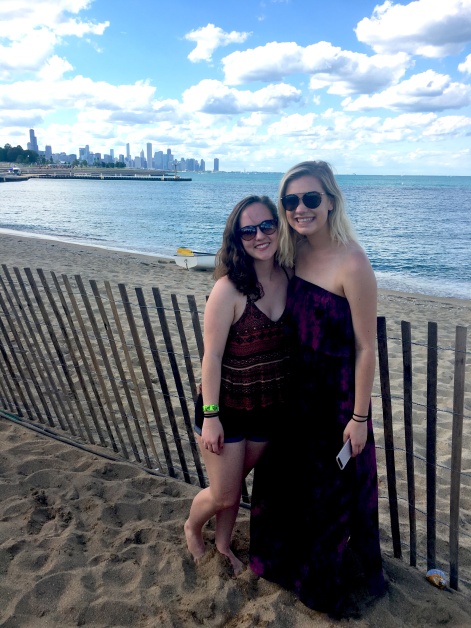 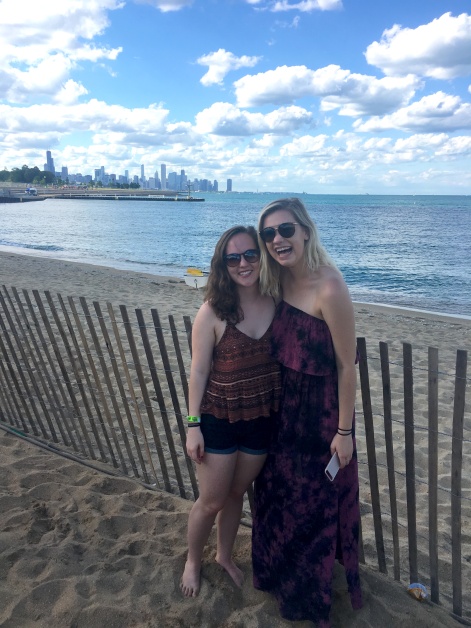 Next up on our list was Marian Hill, the indie electronic duo who has been making waves with their single “Down” and their recent collaboration with Fifth Harmony’s Lauren Jauregui. The lead singer, Samantha,  had a really fantastic voice and sounded great. It was awesome to see a performance on the beach stage with the skyline in sight and the crowd was ridiculously full of people. We wanted to stay for the entire set but headed to the Park Stage a bit early to get our spots for Local Natives.

I’ve been a fan of Local Natives since I was in high school and it was more of a “fan in passing” sort of deal until I saw them this past fall at the Riviera Theater in Chicago. Then I became really passionate and invested in their music and was really excited to find out that they would be performing at Mamby on the Beach.

Local Natives is an indie rock band from California who have been making music together since 2005, getting signed to Frenchkiss records in 2009, and have been compared to bands like Arcade Fire, Fleet Foxes and Vampire Weekend.

Pitchfork considers their sound to be “afropop-influenced guitars with hyperactive drumming and hooky three-part harmonies.”

After listening to their music frequently since last fall, I knew that their performance at Mamby was going to unforgettable. Some of my favorite moments from the performance were when the band sang “Ceilings,” “Past Lives” and “Fountain of Youth.” When the band released their single “Past Lives” last year, the lead singer, Taylor, wrote about the meaning of the song:

“The world is not static, it’s made new over and over again. But we tend to live the same patterns in a loop, loving the same way, wrestling the same demons, the same dynamics playing out around us again and again. Untangling every moment and decision that led us to where we are now can make fate feel concrete, inescapable. But our world is not fixed, it’s constantly reemerging, and we can change it into whatever we want.”

“Fountain of Youth” is another one of my favorites. As some of you may or may not know, I wrote about an organization called Headcount for a journalism assignment last fall, which is an organization that is made up of volunteers who set up tables at music festivals and concerts across the country to encourage people to register to vote. I found out about this organization when I saw Local Natives’ show at the Riviera Theater and have learned since that they have worked with the organization on a variety of shows and have continuously encouraged their fans to participate in politics. I find it extremely important for musicians and those of social status to use their celebrity as a platform to help push social issues that they are passionate about and that only has catapulted my love for Local Natives as a band and as people.

If you are curious to read my story about Headcount, Local Natives and other musicians who are involved with Headcount, click here.

After Local Natives’ set, we were planning on seeing a bit of MGMT, who was one of the main headliners of the night. However, we ended up winning tickets to Local Natives’ after show which was later that night so we decided to leave early to rest and eat some food before heading back out again.

So if you would ask me if Mamby on the Beach was worth it, I would 100% say yes! I believe my Saturday pass was about $85, but I consider it to be fairly affordable and a good alternative to other festivals like Lollapalooza or Pitchfork if you’re looking for a cheaper option and one that isn’t as overwhelmingly large and full of obnoxious people. The beach location was beautiful, the weather was perfect, and the view of the skyline was one you couldn’t beat. I am usually one to pay for festivals and plan to see people from 12pm to 9pm every day, but I decided to take this festival a bit easier and just rolled with the punches, which is something to consider when you decide whether or not to buy a pass to a festival.

Yesterday was something special! Check out our Saturday Recap! 🌸 pic.twitter.com/zQFcVsTYNs

Did you go to Mamby on the Beach? If so, let me know who your favorite act was of the weekend! Or if you’re going to a festival this summer, tell me which one!