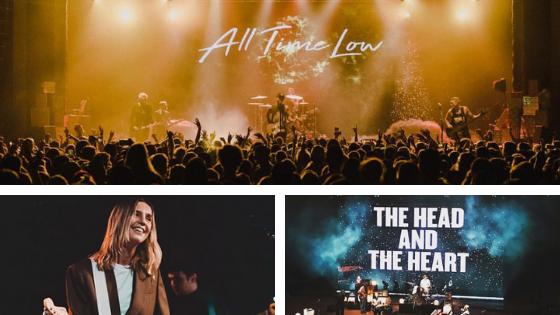 December came and went in a blink of an eye and I managed to see three very different shows throughout the month. I thought it would be interesting to compile each review into one post to represent how different each show was in terms of genre and venue to help convey how different shows can be based on these different characteristics. I rounded up my show reviews in March and June this way as well – you can read those posts here and here.

I had seen The Japanese House perform two other times prior – once at the Bottom Lounge in Feb. 2017 and then that same summer at Lollapalooza. Both of these shows were not the ideal way to see Amber Bain perform: I was late to her set the first time around and her slow, laid-back sound does not work the best in a Lollapalooza atmosphere.

Regardless, I still have loved her music and wanted to see her perform one more time – it was a perfect opportunity since Lincoln Hall is my favorite venue in Chicago. If you are unfamiliar with The Japanese House – it’s a project led by 20-something Amber Bain, hailing from England. The Japanese House is signed to Dirty Hit Records (The 1975, Pale Waves) and has worked closely with members of The 1975 in the studio and has toured with them. After four previously released eps, The Japanese House’ debut album, Good At Falling, is set to release on March 1, 2019.

Like I mentioned before, I have seen TJH two times before and was curious to see a third performance. This time around was definitely the best out of the three by far. Bain seemed more confident onstage and Lincoln Hall is the perfect venue for her to play. It seemed to me as though the setlist included songs far more upbeat than the previous times I had seen her and the vibe seemed to flow better compared to my other experiences. This makes sense, as it’s been over almost two years since I had seen her previously at a headlining show and it’s evident that she’s grown immensely in terms of stage presence and execution. If you are looking for a show that is primarily upbeat, this may not be the one for you. The style of music is far more mellow and “Let me awkwardly sway to this” sort of sound and is a more lax environment in terms of a live music experience.

The nice thing about having so many EPs released is that Bain had a decent amount of music to perform live. Performing 13 songs, The Japanese House performed songs from all released EPs including singles that will be included in the debut album, “Follow My Girl” and “Lilo.” As I’ve mentioned before, I don’t love hearing unreleased music for the first time at a live show because it’s not my preferred listening experience, so I was happy that this was absent at this show besides just two unreleased tracks, which wasn’t the worst. I do wish I got to hear her cover of Fleetwood Mac’s “Landslide,” but I digress.

Overall, I think this third time seeing The Japanese House redeemed the less than ideal experiences I had seeing her live prior and would definitely recommend checking out her debut album in 2019.

December 6 – The Head And The Heart / Chicago Theater

I would never turn down the chance to see The Head And The Heart live, but I was originally not going to be attending this show because the tickets were pricey and I’ve seen them four times. I ended up winning a pair of tickets 5 days before the show.

The Head And The Heart have been making music for almost ten years and are signed to Warner Bros Records (The Black Keys, Dua Lipa, Fleet Foxes to name a few). They’ve released three studio albums – the latest released in September 2016 (Signs Of Light). I believe they have been writing and recording for their next release this year and played an unreleased song at this show.

Many of my readers know how much I love THATH so this was super exciting for me. Their opening act was Mt. Joy, another band that I’ve enjoyed over the past year or so, so I knew the show was going to be super solid. Their opening set was super laid-back and very jam session-esque and their vibes were a perfect pairing with THATH.

Since I have seen THATH so many times, I figured that they would be playing the majority of the same songs as they usually did, but it was a beautiful surprise to hear a few songs that are usually left off the setlists, like “Ghosts” and “10,000 Weight In Gold” which are two songs I’m not entirely sure I’ve heard live.

The band, comprised of Jonathan Russell, Charity Rose Thielen, Matt Gervais, Chris Zasche and Tyler Williams, hadn’t played a show since September, which also gave them an extra burst of energy and excitement onstage that I appreciated. While I constantly think about how much a musician probably gets sick of playing specific songs from their discography, I think THATH does a great job and bringing a new sense of liveliness and heart to their biggest songs that always guarantee a huge crowd sing along. This was evident during the performances of songs like “Let’s Be Still,” “Down In The Valley” and of course, “Rivers And Roads.”

My favorite moments were hearing “Ghosts,” “Lost In My Mind” and “Down In The Valley,” which are songs I never get sick of listening to. I also particularly loved hearing “Library Magic,” which was played as an acoustic trio around a singular microphone. Moments like that during a live performance are unforgettable, especially at a venue as big as The Chicago Theater (it holds 3,600 people). It makes the show feel so much more intimate.

December 22 – All Time Low, The Maine, The Wrecks / The Rave/Eagles Ballroom

Talk about the throwback of the YEAR! When I found out that All Time Low and The Maine were playing a show together, I bought tickets immediately. I had never been to the Eagles Ballroom in Milwaukee (just at the bottom club venue inside The Rave to see The 1975 way back in 2014) and a couple friends and I decided to make a weekend out of it.

The craziest part about this lineup is when I realized that the first time I had ever seen both All Time Low and The Maine was when they were touring together way back in 2008 and that this would be TEN years after I first saw them perform together. It freaked me out to realize how much time has gone past since then but it was really sweet and nostalgic.

We ended up seeing about 25 minutes of The Wrecks performed and despite me not knowing much of their music, they were a great opening act with lots of energy onstage. It’s not easy to be an opening act, especially to be apart of a feel good, throwback sort of lineup, but I thought they did a great job. The venue also seemed very full early into the night which is always good for an opener.

I’ve listened to The Maine’s album releases for ten years now (yes, they still make music) and I hadn’t seen them perform since May 2017 so it was great to see them perform again. I loved hearing “Bad Behavior” – a song from their 2017 release, and “Miles Away” – which is from their 2015 album American Candy (my favorite album by far). While I didn’t love their most recent album, I did become a bigger fan of the song “Taxi” after hearing it live, which is always a nice conclusion to come to after hearing a song live. Music is cool like that.

Unlike The Maine, I haven’t been keeping up with All Time Low’s releases since their 2011 album Dirty Work. I personally found that their sound never really progressed as they continued as a band and I just grew out of that style of music as I got older. Regardless, since this was a radio show, I figured that they would play plenty of throwbacks: out of the 19 songs they played, I knew 14, which was great with me.

I was most happy to hear “Jasey Rae,” a song from the band’s 2006 (wow, I’m old) album Put Up Or Shut Up. The song is definitely a fan favorite but I wasn’t sure how often they play it since it’s so old, and screaming the lyrics (particularly the bridge) gave me such a sense of nostalgia that it made me super emotional – in a good way.

I have no idea if I’ll ever see All Time Low perform live ever again (crazy enough I saw them two times this year, earlier at Lollapalooza) and even though I really don’t keep up with their music anymore, it was such a fun show and the perfect way to end 2018. Throwbacks keep us young.

Thanks so much if you read: I ended up writing a review of some sort of every single performance I saw this year, which was a writing exercise I hoped would help me develop my work and definitely helped get the word out on my blog. I ended up being able to cover eight shows on press passes this year which is something I never imagined would happen for me. If you read my posts casually or read everything I write, you matter a lot to me. So thanks for an amazing year for Chicago Haze.

You can read every show review I wrote this year by clicking here.