Life is dramatically made up of forks in the road. What should I eat for breakfast today? What time should I leave for work? Who should I date? Move in with? Marry, even?

You may pick one route and never think twice of what could have been waiting for you at the end of the other one. However, the multitude of choices and the “what ifs” can consume you to the point where you may not ever feel secure with the direction you’ve chosen. This is nowhere near a new concept, and music has done its fair share of exploring the fear of the unknown and the desire to feel secure in decision making. It’s better to speak up and regret what you said rather than keeping it quiet and wondering “what if” forever, right? (I’m looking at you, Taylor Swift, specifically during your Speak Now era). 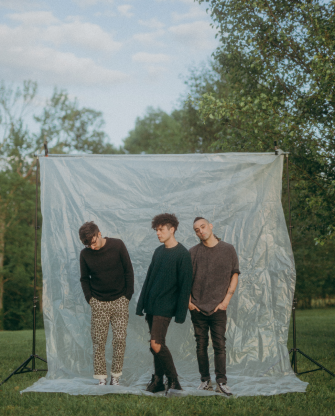 Nashville alt-pop band Nightly comes to terms with this discomfort in their newest single, “not like you,” an upbeat, synth-pop track about “lost opportunities and fleeting chances.” I’m a sucker for an upbeat song that expresses a sentiment that is…well…not upbeat. “not like you” is another one of those tracks that I just know I can see playing in the background of a Netflix coming-of-age original film where the protagonist contemplates their thoughts. Lead singer Jonathan Capeci reminisces on a previous occurrence with a lost love, commenting on how they feel unfamiliar and disconnected: sort of like an out of body experience. How can someone you’ve once felt so strongly for suddenly feel like a stranger? There’s something so haunting about no longer being able to resonate with the feelings you once held for someone: even more so when you wish that you were able to say more than you did.

Nightly was formed by cousins Jonathan Capeci and Joey Beretta, as well as drummer Nick Sainato.”not like you” follows the band’s May release “you should probably just hang up,” a song released on BMG Recordings (also their first release on a new label after leaving Interscope).

The group has been releasing music at a steady pace since the success of their debut EP Honest dropped in 2016. Their biggest single, “XO,” garnered over two million streams on Spotify in just a few weeks, and has racked up over 10 million streams since. The buzz from Honest helped the band earn supporting slots on tours with artists like Kesha and The All American Rejects, and also helped them with slots performing at SXSW and Bonnaroo. The band plans to release more music this year.

“not like you” is available to stream on all platforms now.