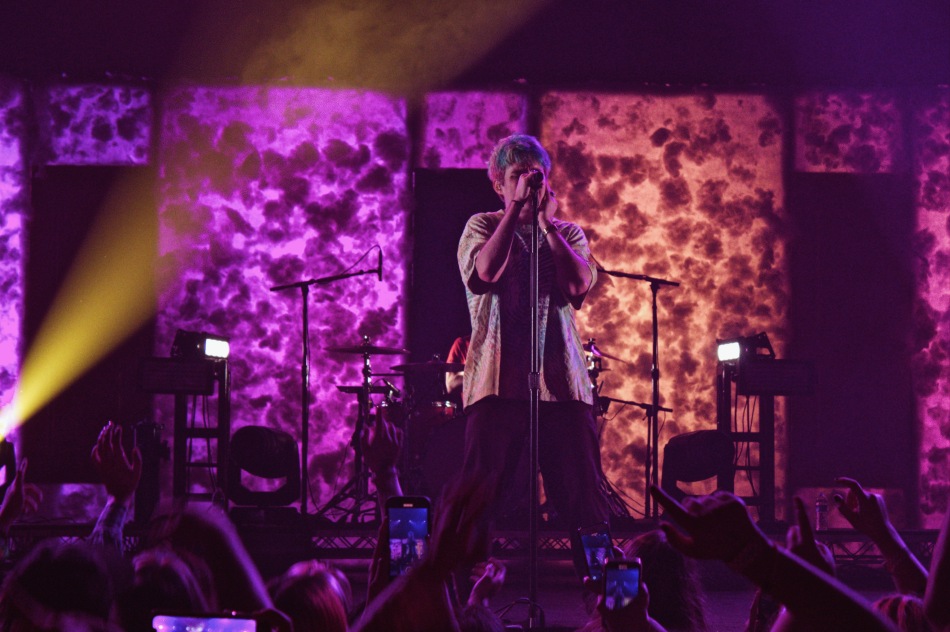 With the resurgence of pop-punk music building all around us, it makes sense that Houston-born trio Waterparks, composed of Awsten Knight, Geoff Wigington, and Otto Wood, are having “the” moment in their career right now. The band, who has been releasing music together since 2016, just closed out their biggest headlining tour to date across the United States, with their sights set on the UK early next year.

Waterparks have been hard at work paving the way for themselves in the pop punk music scene for the past ten years, performing at local venues throughout their home state since 2011, opening for artists like Aaron Carter, Never Shout Never, and Sleeping With Sirens. The band got their big break back in 2015, signing with Equal Vision Records and eventually earning the opportunity to work with Benji and Joel Madden of Good Charlotte, who they hired as their managers. Their first EP under Equal Vision, titled Cluster, dropped in 2016 and was co-produced by Benji Madden. Another familiar name in the punk space, Mikey Way was involved in the project as well: as the bassist of My Chemical Romance, Way lent his talent as a musician on the Cluster EP.

As you can see, Waterparks have made a name for themselves over the past decade by forming relationships with other artists in the space: primarily the ones who were at their peak when I was a pre-teen. This seems to be a pattern of sorts for fellow fans of the band, considering I overheard a fan at Waterparks’ show this past Monday at The Wiltern say they “were really into Black Veil Brides in 2011.” Whether or not the majority of the fans at the last night of the tour discovered Waterparks because their favorite punk bands vouched for them or not, it was evident that the spirit of pop punk of the 2010s was being kept alive through the music being performed.

While artists like The Maine and All Time Low are still successfully releasing music as artists that once lived in the same space, it’s evident that their music has shifted to be consumed commercially rather than to be performed in the parking lots of shopping malls across the United States (RIP, Warped Tour). While Waterparks only played a handful of dates at the now defunct multi-city event, I’d be curious to see how their performance stacked up to their peers about ten years ago, because I’d vouch for their ability to entertain a crowd over a lot of artists who were at headlining status back in the day.

Though I actually never attended Warped Tour myself, I’ve been to plenty of shows in my lifetime that emulated the same demographic: we’re all pretty jaded and hard to please. You don’t bring the energy on stage? I certainly don’t care. We grew up on All Time Low (before they were deemed problematic), The Maine, 3OH!3 and Mayday Parade starting mosh pits, smashing guitars, catching bras onstage, and burping into the microphones. If you’re not doing everything you can to keep the crowd invested in you, it’s over.

With that being said, I was incredibly impressed with Waterparks’ performance as well as the crowd that seemed to know every single song from the first note played. Opening with three incredibly upbeat songs in “Numb,” “Watch What Happens Next,” and “Fuzzy,” the energy started on an incredibly high note, one that felt pretty impossible to maintain for another 60+ minutes of performing. I do think the band managed to hold onto it pretty well, though.

I am only familiar with the Waterpark’s 2021 album, Greatest Hits, and as someone who isn’t educated on the band’s fandom, I had no idea what to expect. But they were pretty dedicated, lead singer Awsten mentioning at one point during the performance that he heard that there were fans lining up as early as the afternoon before to get into the show. Many fans had handmade, decorated signs and colorful flags: I even saw someone throw a Capri Sun onstage (luckily it was not open). Is this some sort of inside joke I am unaware of? Probably. Another joke I didn’t quite get, Awsten telling fans who continued to scream during his moments of banter to “shut up.” Not what I’d personally like to hear from my favorite artist, but the audience ate up every minute of it.

Waterparks kept up the energy of the 23-song set from start to end, though it did feel like it started to lose speed about halfway through: albeit the reasoning was sweet. Awsten pulled out an acoustic guitar and what seemed to be in an instant, managed to get the crowd to sing three songs in a row (ish): the chorus of “Not Warriors” and full versions of “Fruit Roll Ups” and “21 Questions.” A special guest appearance by Christo from Bad Suns made the cut during the performance of “Stupid for You,” and artist Phem, who toured with the band, appeared to sing on “Turbulent.”

As we continue to see different versions of pop punk making its way back to the mainstream, it’s interesting to see the genre that once was the soundtrack to so many teenagers’ lives ebb and flow with the introduction of artists like Waterparks. It feels like they’re really in competition with themselves at this point: and I don’t think they’d have it any other way.