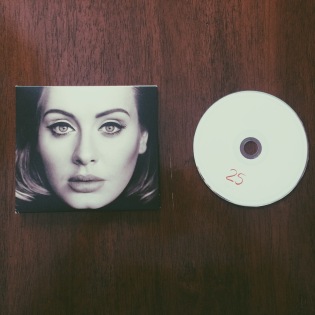 If you aren’t living under a rock, then you must be aware that the music industry has forever been changed after yesterday’s release of Adele’s newest album, 25.  Projected to sell 2.5 million copies in its first week of circulation, the album is sure to get great reviews as a follow up to her smash 2011 hit, 21. Here is a post reviewing 25 in its entirety. I hope you enjoy reading!

Overall, I think this is a strong collection of songs on a solid album. Adele is under a lot of pressure to deliver a powerful album, and I think she successfully did so. After listening to a number of new albums that have been released within the past few weeks (Ellie Goulding, One Direction, Justin Bieber, etc), I find it rare to fall in love with nearly all the songs on an album, and I did just that with this album.

There you have it! If you’ve made it to the end of this post, I’m so appreciative that you care enough to hear about my thoughts on this album. This is my first in depth review and I’m experimenting with the format in regards to how to write them. If you enjoyed this post, please let me know! Don’t forget to subscribe to my posts via email.