In 2012, also known as the golden age of YouTube covers, Lennon Stella and her younger sister Maisy went viral for their rendition of Robyn’s “Call Your Girlfriend,” complete with margarine containers as percussion. Insane internet fame led to a pair of starring roles for the duo on Nashville, the ABC drama where the girls played Connie Britton’s young daughters.

Two years after the Nashville series finale and eight after her first bit of YouTube virality, Lennon Stella has released her full-length solo debut. Three. Two. One is Lennon’s grand reintroduction to the world: her opportunity to show listeners what makes the once-child star an artist worth listening to. What makes the record distinct, and ultimately successful, is Lennon’s refusal to blindly reinvent —a move that might be expected by a twenty-year-old artist looking to assert her point of view. Three. Two. One. is a glistening yet nuanced pop record grounded by the maturity of a well-honed voice who uses her unique childhood in the spotlight to inform her sound, rather than cloud it. 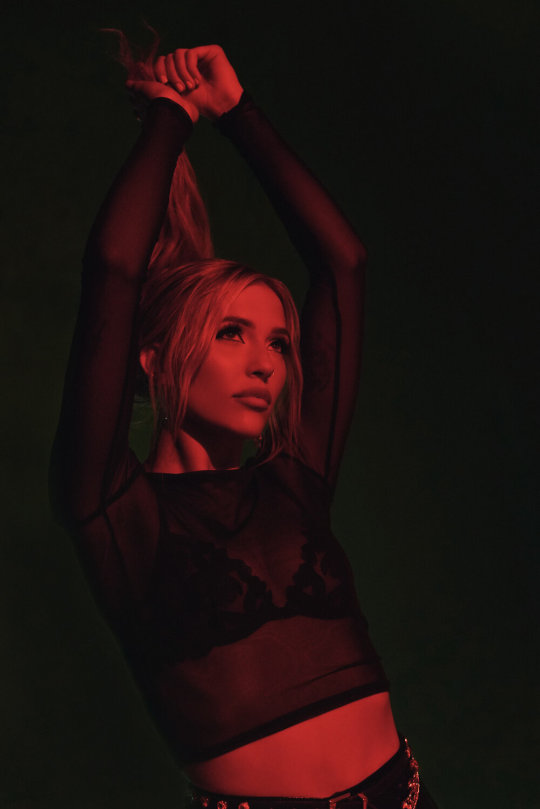 The album opens with a handful of understated pop tracks that reflect on a toxic relationship. The opener “Much Too Much” interpolates wordplay with a silky chorus, and “Kissing Other People” and “Fear of Being Alone” introduce some more anthemic elements, but fall short of being full-on bangers. The former is a playful “I’ve-moved-on” track, and the latter is a dance-inspired diagnosis of the root of Stella’s relationship struggles. The delightfully murky “Pretty Boy” is a production standout, a track reminiscent of Lykke Li’s most recent work. Though the first half of the album toes the line between catchy and cliché, Lennon reveals her cards in the middle of the record.

The beating heart of the album arrives in “Older Than I Am.” In the piano ballad, Stella sings: “I do all my own healing/Manage all my own feelings,” but wishes she could allow herself to be more reckless. It’s one of two songs on the album Lennon doesn’t have a writing credit on, but with her aching vocal delivery and the spot-on lyrics, it’s impossible to tell.

The theme of growing up, equal parts tragic and exhilarating, colors the rest of the record. “Bend Over Backwards,” a self-advocacy anthem, pays homage to MGMT, a band Stella has covered in the past, and “Since I Was a Kid” might just be Gen Z’s new rallying song. Standout lyrics like “I’m a problem solver/because I always used to be a problem” eliminate any path to cliché as Stella expertly melds moral optimism with tough resilience. Coming-of-age songs often fall prey to formula, but Stella has quite a few on this record alone that feel tailor-made to her breathy vocals and experience as a child famous on the internet.

Fans who have followed Lennon since her YouTube days will be excited to see her sister Maisy, now sixteen years old and equipped a soulful voice of her own, featured on “Weakness (Huey Lewis).” The double track, the perfect follow-up to “Since I Was a Kid,” has Lennon moving from the role of scrappy fighter to tireless protector. The minimalist production on the “Weakness” half is a more mature take on the duo’s acoustic roots, while “Huey Lewis” is a grown, electronic track reflecting on the tragedy of lost childhood: “What about our family? What about the house we used to know? Where it seemed honest? Where we would fall asleep to Huey Lewis on repeat? What happened to us?”

The eight minutes are graceful as they are heartbreaking, a thoughtful tribute to Lennon’s roots as one half of a sister duo. One of the strongest upbeat tracks follows, and it fits right into the narrative; “Save Us” is another lyrical dedication to Maisy, a featherlight synth track reminiscent of The 1975 with a Donna Lewis writing credit.

Those who have watched Lennon grow up alongside her sister will be relieved to see the duo reunited in a standout track and to hear her devote so much of her debut to unpacking her experiences as an older sister. New listeners will find her originality, maturity, and sweetness refreshing, especially those who might pre-judge Lennon for her young age.  But even in the songs that deal with pop’s default topic, relationships, Lennon shows a maturity beyond her years. In “Pretty Boy,” she’s irked that a potential partner can’t match her depth, and in “Golf on TV,” she glorifies the sweet simplicity of a healthy partnership. What makes Lennon’s debut unique is a dedication to vulnerability and a refusal to maximize production in favor of a more tempered approach. The record is dark but not performative, and her lyrics explore topics often overlooked by her pop peers.

The closing track “Goodnight” starts off as a simple waltz, but soon swells into an unexpectedly lush outro complete decorated with harps and synths. It’s a smart way to sign off; like the song, Lennon seems to have transformed a childhood career into one with serious artistic possibility. For someone who has never fully had her own spotlight, Lennon Stella clearly has a point of view, one that will only become more captivating as she grows.

Listen to Three. Two. One. on your preferred streaming platform here.

0 comments on “Lennon Stella Is All Grown Up on Three. Two. One.”