Way back in the beginning of March, organizers for the long-standing South By Southwest Festival, which would have been put on for the 33rd year in a row, was canceled due for the first time in its history due to increasing concerns of the coronavirus. This was one of the first festivals of the year to cancel due to the pandemic, and many people were skeptical of the virus’ impact on our daily lives (myself included). Not long after, festivals across the country were canceling, tours were being rescheduled, and independent music venues had to close their doors and miss out on millions of dollars in revenue.

As of mid-May, major US festivals like Coachella, Bonnaroo, Pitchfork, and Hangout Fest have been canceled or rescheduled. Coachella is currently scheduled for two weekends in October 2020 and Bonnaroo for September. As of now, there’s no word on whether Chicago’s own Lollapalooza will be canceled, and festival organizers announced via Twitter in April that they plan to arrive at a final decision by the end of this month. Independent music venues in Chicago have tickets on sale for shows happening as early as mid-June, despite the city’s current policy of no gatherings over 10 people.

Major touring artists like Billie Eilish, Taylor Swift, and BTS have called off their shows for 2020 and aim to reschedule them for 2021. Others like Harry Styles and Lady Gaga have major shows scheduled for the rest of the year and have not made announcements saying otherwise. According to Variety, Around 9,000 of Live Nation’s concerts have been impacted by the pandemic. Interestingly enough, about 90% of fans are holding onto their tickets instead of seeking a refund, with hopes that their shows will eventually be rescheduled and not canceled altogether.

Last week, Live Nation released their first quarter earnings of 2020. According to this post in Billboard, concert revenue dropped 24.6% and ticketing revenue 15.8% compared to the earnings in the first quarter of 2019. 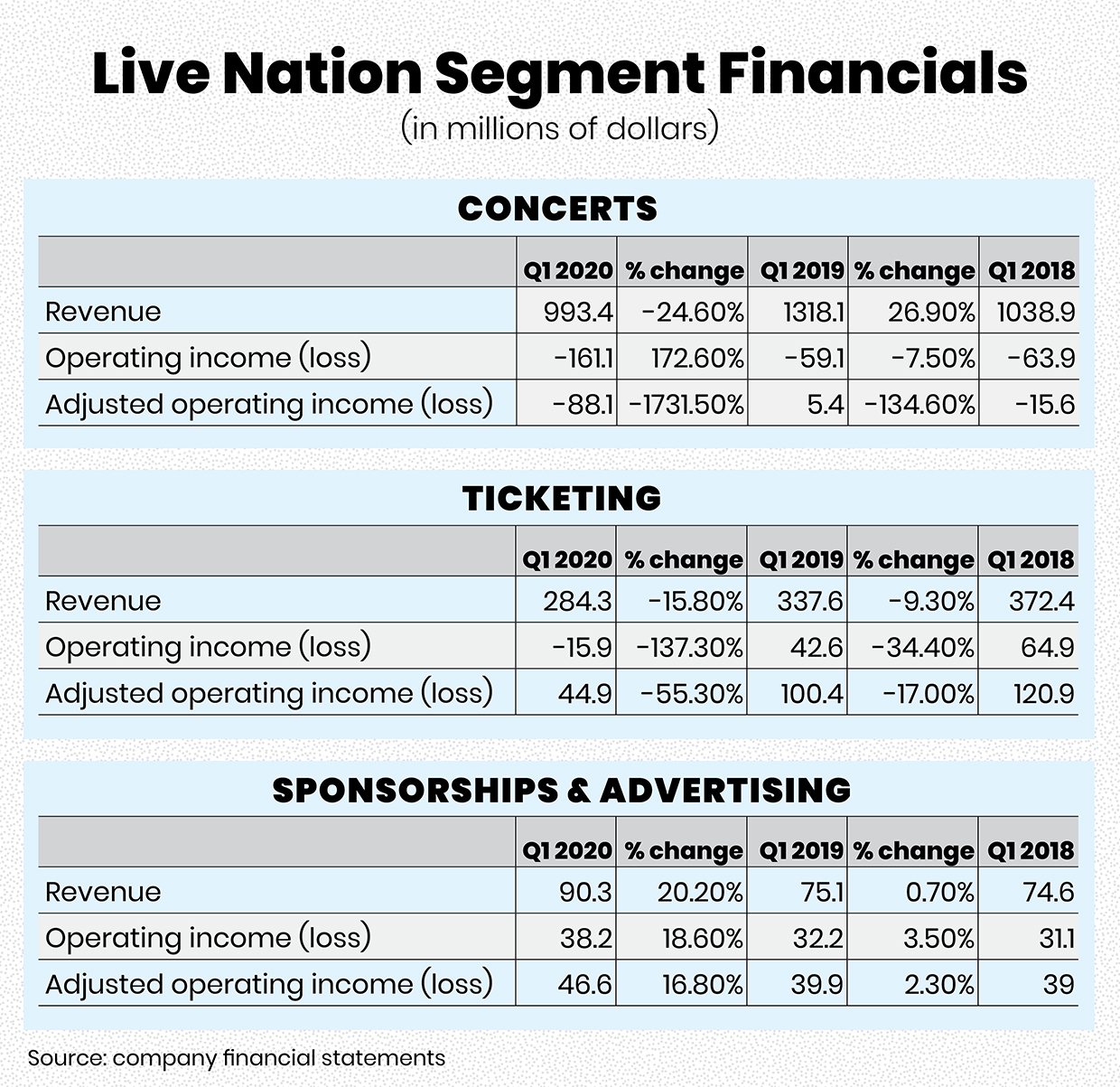 With most of the United States under some sort of lockdown or stay-at-home order, Live Nation and other companies now have to rethink their strategies amidst an unpredecented time in history with no clear “back to normal” date in sight.

Later this year, Live Nation plans to host virutal concerts and testing the idea of “drive-in concerts” as early as mid-June. One of the internet’s favorite examples of this concept popped up earlier this month after drive-in raves started popping up in Europe. 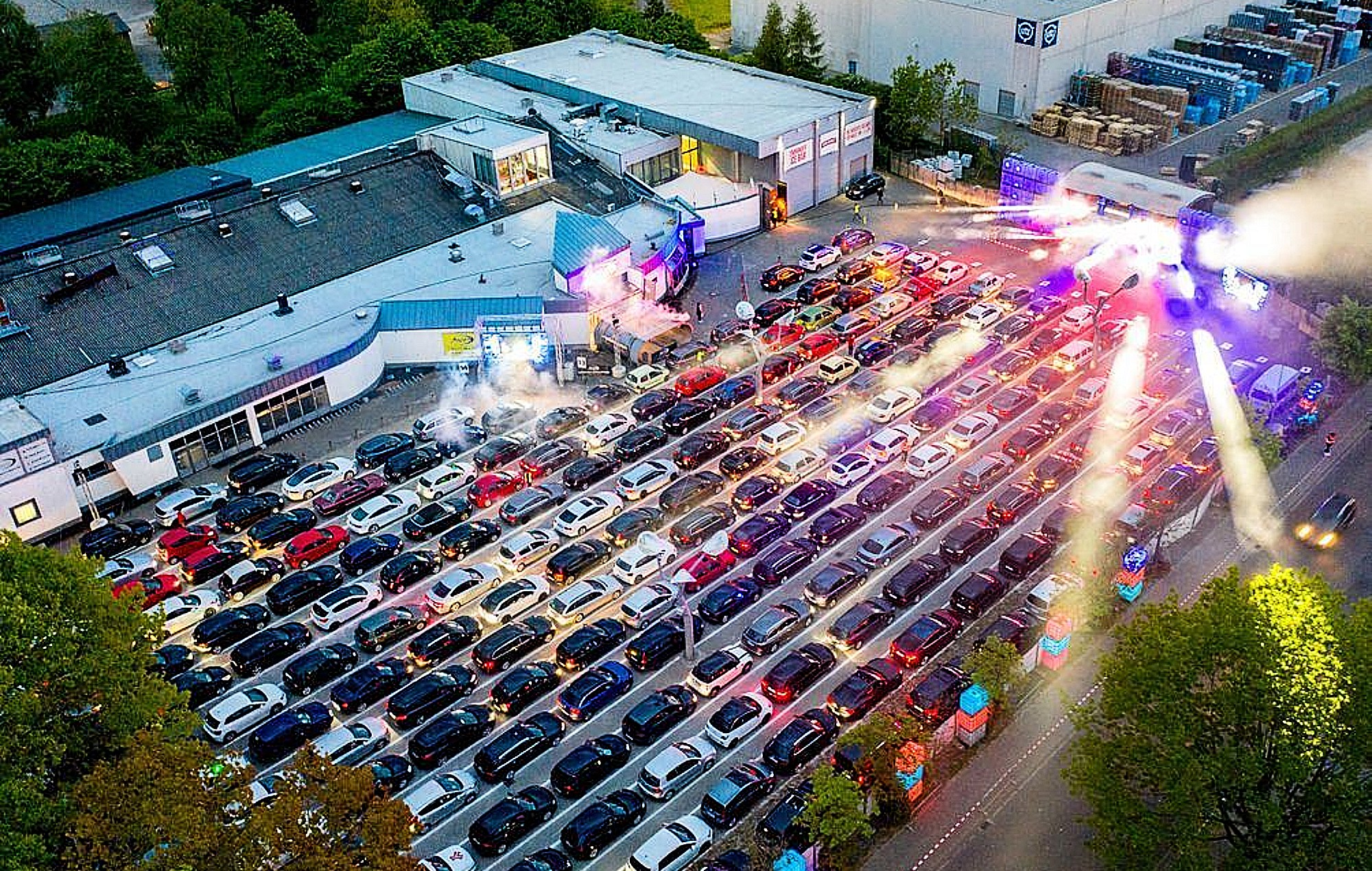 It’s a time for those in the industry to get creative. What else can they do besides putting on virtual concerts with hopes that a fan is going to pay the same amount for not the same experience? One of the first to take a gamble on a new concept will kick off this Friday in Arkansas. A country-rock singer by the name of Travis McCready will be playing an acoustic set in Fork Smith, Arkansas. 229 people will be allowed in the 1,100-seat venue, which translates to just about 21% of the theater’s capacity—if McCready can convince that many people to attend an event hosting that many people.

Depending on the success of this show—which as of May 12, currently has 56 tickets left on sale, Live Nation may follow the concept to implement into their own shows later on this year.

“There are a lot of great artists that can sell out an arena, but they’ll do higher-end theaters or clubs…over the summer there will be testing happening, whether it’s fan-less concerts, which offer great broadcast opportunities and are really important for our sponsorship business; drive-in concerts, which we’re going to test and roll out and we’re having some success with; or reduced-capacity festival concerts, which could be outdoors in a theater on a large stadium floor, where there’s enough room to be safe,” says Live Nation CEO Michael Rapino.

All of these strategies are fine and good, but will concert-goers feel comfortable attending these events (assumingly) without a vaccine publicly available? A study conducted by a sports and events research company, Performance Research, discovered that 44% of respondents would “attend fewer large public events, even once they are cleared by the CDC.” 47% agreed that going to a major public event “will scare me for a long time.”

The next few months will be an important time for companies, artists, and venues to test the waters and get creative with ways to sell their products: whether they are albums, tickets to virtual or modified live events, or something else. Unprecedented times call for unprecendented measures.

Would you feel comfortable attending an event with reduced capacity, increased cleaning, and social distancing measures in place? Let me know in the comments below.