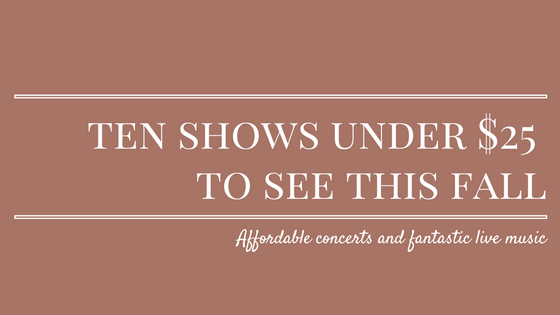 A lot of people tend to ask me how I can afford going to as many shows as I do – and my response is always that nearly every show I go to costs less than $25. Sure, I will splurge on a few shows here and there, but the majority of them tend to be pretty affordable.

Chicago has a fantastic music scene and we have so many venues, I am honestly never bored and it’s amazing that this is the city I get to spend my college years in.

There are a few reasons why I look forward to the fall, but the tours that are announced during this time of year is definitely my favorite thing about the season. October to November is always super exciting and there are a TON of shows I want to go to in Chicago during this time frame! To share my enthusiasm, I’ve rounded up a few that are less than $25 to prove that it can be done!

Check the list out below. BTW – I included fees in each ticket price.

Why: I personally wish I was going to this show, because I have been into BRR since 2014 and missed an opportunity to see them at Lollapalooza. They also have some newer music that’s been featured in shows like Shameless. I have heard that they put on a really great live show.

Who: From Indian Lakes w/ Made Violent, Wild Wild Horses

Why: As I’ve stated before, From Indian Lakes is definitely my favorite band and I never get tired of seeing them perform live. They’re one of the most talented indie bands around right now and I would jump on the opportunity to see them at such a small venue like the Subterranean before they blow up.

Why: Lewis Del Mar was one of the artists that I really wanted to see at Lolla this year, but I missed them due to a scheduling conflict. They have a really interesting and unique sound and outlets like Billboard are already predicting that they’re going to go far.

Why: Sunflower Bean is definitely of the most talked about up and coming bands (called “NYC’s Coolest Young Band” by Rolling Stone), and have been making headlines over the summer.  They’re also all under 21 years old which is pretty fantastic.

Why: I’ve mentioned this group in a previous blog post, and I’m actually going to this show and I’m looking forward to it. There’s not many things I find more exciting than talented family members making music together. Side note: all three sisters also appeared on Jimmy Fallon a few months ago during the summer, so the fact that they’re playing at such a small venue is pretty awesome.

Why: One of my favorite new albums came from Bad Suns, and I am most definitely trying to go to this show. Coin is also a super fun band and I have been wanting to see them live for awhile. All in all, this is a great show to kick of Halloween Weekend with.

Why: One of my favorite up and coming pop groups, Lany! I am obsessed with their 90s boyband sound mixed with indie pop and got to see them open up for Troye Sivan last november. I am super excited to see them in their own element and I think they’re going to take 2017 by storm. Take this chance to see them before they blow up!

Who: The Hunna w/ The Shelters and Night Riots

Why: Absolutely one of my new favorite bands, The Hunna is like a mix of The 1975, Catfish & The Bottlemen, and The Neighbourhood. What else do you really need in an indie rock band? I am really loving their debut album that came out about a month ago and only expect huge things from them in the next year. Also, I’m predicting now that they’ll be playing Lollapalooza 2017.

Why: I’ve been following this band casually since about 2011 when I saw them perform while on tour with The Maine. I also caught about half of their set at Lollapalooza this year and they were definitely one of my favorite sets of the weekend. They have an amazing energy during their live performances and have so much fun. There aren’t as many genuine bands like this on the touring circuit and they will for sure get you dancing.

Why: An Illinois native, Kiiara has had quite a crazy 2016. Her single “Gold” got quite the heavy radio play and she’s been touring her EP. Her performance was mediocre at Lolla (in my opinion), but I’m giving her the benefit of the doubt, since she hasn’t been performing live for very long. She’s also pretty young and will only get better from here.

I already have tickets to see From Indian Lakes, Joseph, and Lany. I will hopefully be checking out some of the other shows, too!

Don’t forget to subscribe to my blog by adding your email address to the right side of my page. You will get an email every time I post something new!